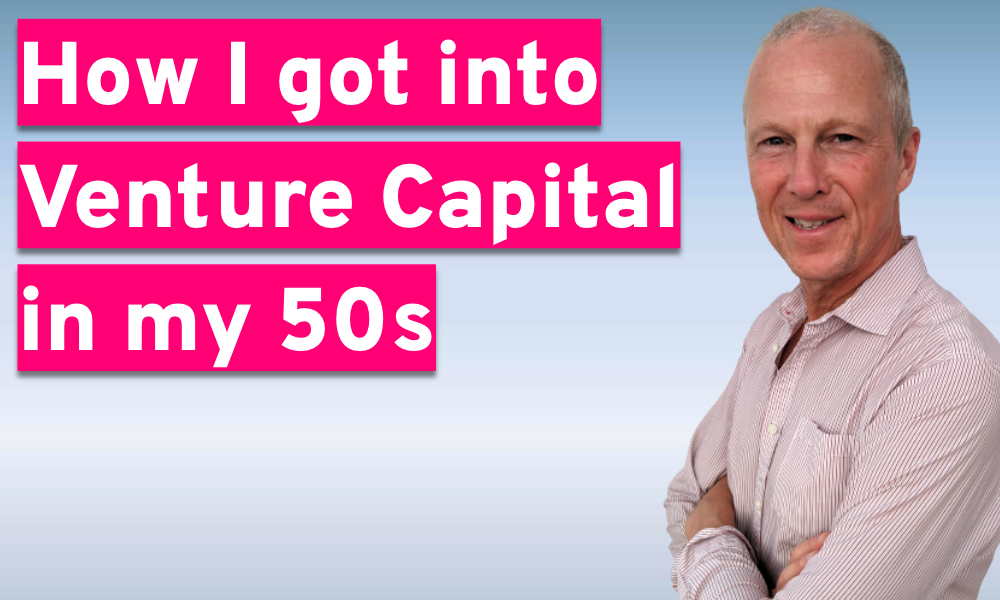 Starting a role in VC in my 50s after a 20 year career in corporate was never part of the plan. But, when I left my last corporate role 3 years ago as part of a number of leadership changes and spent the best part of a year at home during lockdown, finding another senior role with all the attendant politics and relentless pressure just didn’t seem appealing.

I wasn’t set on getting into VC at that stage but as I started considering my options, I thought I’d give an old friend from Florida a call. We go back a long way, over 30 years, from when I was a 21 year old out of university seeking to find a way to spend a year in the US. My friend had 2 young boys and they were seeking a ‘Manny’ to look after them. I was up for giving it a go and ended up living with the family for a year. It’s fair to say my domestic skills weren’t at the level of previous Nanny’s but I loved becoming like a big brother to the 2 boys, and really hit it off with my friend who showed me much of what the sunshine state has to offer.

Over the following years my friend and I kept in touch. When I was his Manny he part-owned a couple of pharmacy stores but his career really took off when he joined the health insurer Foundation Health. After a number of years of helping expand the business, he left to set up a PBM (Pharmacy Benefits Management) business with one of his clients and another partner. They successfully grew the business to $5bn revenue which led to a couple of successful exits, firstly to PE and then to a major high street pharmacy chain.

As my friend is now an ‘Ultra High Net Worth’ individual (a phrase I hadn’t come across before), he spends his time enjoying retirement and advising on various businesses his FO have invested in. When I put the call into him, I asked whether he was open to creating a role in which I could help the FO with their investments. As this was received positively, I produced a proposal which resulted in my setting up my own business to source and diligence opportunities for investments in ventures.

A fresh start in VC

Where to start? It felt like I was entering a new world with strange sounding acronyms like MOIC, IRR, NAV… Google was a blessing in those early days as I went about learning the basics of investing. I also had help from my friend’s Wealth Advisor (ex-Goldman, JPM) who provided guidance on how to go deep with due diligence. He made it very clear to me there’s a lot of businesses making fraudulent claims out there such as Theranos (a scandal I wasn’t aware of) and that I needed to go hard on demanding to see evidence backing up claims and assumptions behind products and growth projections, and on seeing 3rd party validation of the company being who they say there are.

Having built up some foundational knowledge on VC, my next step was to get a good understanding of what the FO were looking for. To do this, I drafted a Framework document which outlined key factors such as how much the FO wanted to commit to ventures, the sectors to target, the preferred funding stage and typical ticket sizes. We broadly reached agreement on these key points and so now I was ready to go and source some deals.

To do this I knew I needed to create a network. I didn’t know anyone who worked in the investing world so to get started I took 2 approaches - leveraging contacts from my existing corporate network and writing to boutique VCs in London. Some of these just ignored my approach, which I found surprising given I was representing a FO with money to invest - why didn’t they want to talk to me?! - but others were happy to have initial conversations about what the FO were looking for. Joining GPFO, a UK-based FO organization, proved to be particularly helpful as I got to meet fellow members and find out about their investing interests.

Building a way of working in VC

As my network grew, I started to be sent all sorts of decks from companies looking for funding. Based on the Framework we’d developed, I was quickly able to assess which ones didn’t align with the FO’s interests and which ones merited further investigation.

For the latter, my approach has been to interrogate all the documents in data rooms and compile a list of questions.

These broadly fit into 2 camps - (i) to further my understanding of the business and market context in order to form a view on product market fit and (ii) to challenge the assumptions underpinning effective scaling and the financial growth model. This is followed by a video call with the founders during which I ask them to talk me through their big picture vision, followed by questions I’ve prepared on specific aspects of the business. Diligence can also involve taking reference calls from clients or independent authorities.

For those businesses which pass my due diligence, I prepare a presentation deck to put to the FO. Over time, I’ve come to standardize the running order of the deck in a way which builds the case for the investment - problem, solution, market opportunity, risks etc. I find building my own deck is far more effective than simply presenting the company’s investment deck as I can weave in different data points from documents in the data room and control the narrative.

My objective in these meetings is to secure approval from the FO to meet the founders. Some have been a straight ‘No’, some have been ‘Looks interesting but we need to ask more questions’ and others ‘We like the look of this so let’s meet the team’. For the latter, I facilitate and chair a meeting in which the venture pitches to the FO and is expected to answer questions in a way which instills confidence. If the meeting results in a positive outcome, I’ll progress to the final stage of closing off any outstanding due diligence and reviewing the investment Subscriptions documents.

I’ve been doing this role now for 2 years and it’s been a great move. I had some transferable skills like preparing business cases and negotiating commercial agreements but it’s been motivating to learn new skills specific to VC such as rigorous business due diligence, competitive analysis and returns modeling. Meeting lots of passionate, highly driven founders of startups vs internal corporate stakeholders has been a particularly enjoyable part of the new role.

And what about how I now gain a sense of achievement? Well, that used to be defined by securing ‘buy-in’ and approval of a project/budget/recommendation after having worked through layers of corporate hierarchies. Now it comes from when the FO decides to make an investment in an opportunity I’ve taken them, as I know it will be helping an exciting venture with their funding and hopefully results in an incremental increase in my friend’s FO wealth.

The change has also made me appreciate that you’re never too old to learn new skills and switch roles. For sure my long career in corporate - where the only constant is change - helped me adapt but I found being honest about how much I had to learn, rapidly building out my network, asking lots of questions, reading a ton of articles, and reviewing as many investment decks as I could - ie just throwing myself into it - enabled me to build confidence in my capabilities and deliver the level of service expected by the FO.

Mark Lewis runs Lewis Investment Services Ltd sourcing and due diligencing deals for a single Family Office in Florida. He lives in the UK but sources deals internationally for the FO primarily in healthcare, fintech and B2B/B2C SaaS/Subscription services.

Mark can be contacted at mark.lewis1927@gmail.com